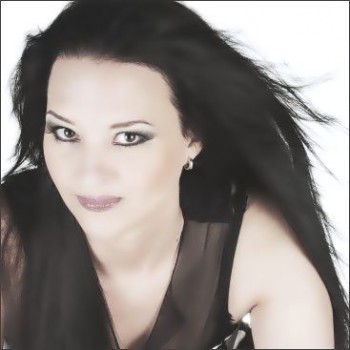 Sabine Edelsbacher has begun her international career as a singer in the year 2000 with the band EDENBRIDGE and its release of the first studio album, "Sunrise in Eden". Meanwhile there are 9 successful studio albums out plus a 6 disc history DVD, and the band toured all over Europe and Asia. She has participated in numerous projects by and with renowned artists. Together with Lanvall (her life and musical partner) she started the acoustic project VOICIANO in 2014, based on piano and vocals.

Singing is Sabine's passion since she has been a child. She sang in various choirs and later accompanied herself with the guitar. Independently and meticulously she has filed for more expression and clarity and recorded herself on a tape recorder. Sabine: "This allowed me to correct and improve myself what brought me a lot of joy. For hours I was busy and was able to lose track of time." At that time, Sabine decided to become a singer, although the path went different first.

Following her social vein, she attended an education as a nurse. While working on an ear, nose and throat department, she gained knowledge of the anatomical conditions for breathing and voice. However, she was never very fascinated about the analytical approach.The experience as a child showed her, it is better to breath and sing for a soul voice without thinking too much.

Sabine: "The desire on stage to sing and to touch peoples' hearts became stronger again after I realized that something lies slumbering in me that cries out for expression." She started her first live experience in 1994 as guitarist and singer in a local girl band. At this time she also took singing lessons for the first time, which were heavily orientated on body awareness and thus corresponded to all of her access for vocal development.

In 1996 she joined the band project CASCADE as a singer. Out of CASCADE the band EDENBRIDGE was formed in 1998. Shortly afterwards they signed their first record deal with Massacre Records (Germany).

Sabine: “For my personal and vocal development I always have drawn from the transcendent and have dealt with what scared me most.” Social taboo subjects such as death and mourning were Sabine's research for a long time. While she was acclaimed as a star on concerts and tours, apart from the stage, she accompanied people on their ultimate way in the palliative area. Her vocal and personal development has always been rooted in the tension between these conflicts. Through further educations, but above of all the personal working with artists (actors, dancers, singers, etc.) she could preserve the ease in life and bring the energy that arose from it repeatedly charismatically on stage.

Since 2004 Sabine has been passing her access to voice and personality in her trainings and individual coachings with a lot of enthusiasm. More information in German: www.edelstimme.com